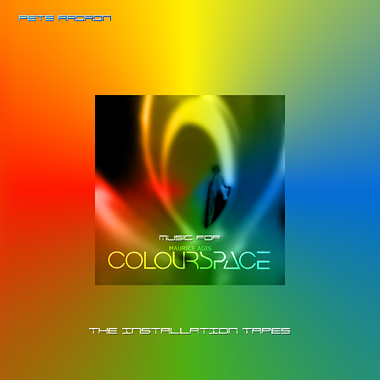 The music inside Colourspace was on two tapes, Yellow-Green, 19 minutes long, and Red-Blue, 23 minutes, which were looped simultaneously changing the way they overlapped throughout the day. the two speaker pairs were positioned to cross each other so the sound moved all around you, each speaker hidden in a cluster of a particular colour.
Within The Experience contains the greater part of both tapes and has always felt like complete, self-contained opus to me but the nature of the concept behind it makes it by definition impossible to regard it as the definitive mix as there is no such thing.

My first time inside Colourspace was on campus at Surrey University as a student in 1981. The music, organized by one of my lecturers, Robin Maconie, was improvised, avant-garde, quite spiky and though it worked well I really wanted to hear something swooshy and wooshy, lush and mysterious in there.
Within The Mind was written immediately after my second visit, at the Barbican, London in October '87. I arranged to meet Maurice Agis to play it to him and was immediately asked to write music for the Los Angeles installation 6 weeks later.
Within The Mind was also improvised - this time in pairs of tracks for each colour, with the other colours turned down while I recorded. The resultant random interaction makes for a much more intense ride than Within The Experience where I used similar sounds and material to create a much more peaceful, fluid atmosphere.

Although when these two pieces were originally produced it was hard enough just to find 2 cassette-decks that played at exactly the same speed - and although if you can place yourself between 4 identical speakers crossing each other in pairs you will get an excellent result - you should not worry too much about your listening set-up.

Depending on where you were inside the Colourspace the mix between the tapes would be completely different anyway. These pieces are also worth listening to on their own and should work in any number of situations, regardless of how balanced they are or how spread the sound.
For example:
Play both on a PC (from the CD or copied onto your drive) through 2 software players but one sound system if necessary.
Play one CD on your hi-fi and the other quietly on a walkman through headphones.
Play the CDs in adjacent rooms so that the sound fades from one to the other as you walk between.
Create your own 'definitive mix' each time

After 16 years there was some inevitable degredation on the original tape-recordings. Despite my best efforts at restoration there remain some faults still audible in places but at the same time the sound has also benefitted considerably from the technology now available to me and it was important enough to me to make available a piece of work that I am still very proud of that I decided for once to relax a little on my usual production values.