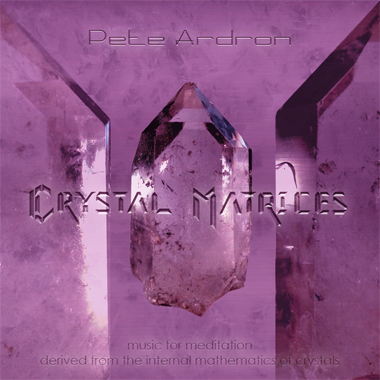 From the CD booklet:

"Everything, when it comes to it, boils down to numbers - music and crystals in more obvious ways than most.
We respond very naturally to the simple mathematical relationships inherent in all music - even a single note. The more exotic we make the maths - the more exotic the response.

Whereas we might not all readily be able to 'tune-in' to a crystal, we will, at least subconsciously, absorb the numbers in this music, and the framework - the matrix - they form, may hopefully help us to align ourselves to the crystals, like moving a TV aerial to get a better picture.

I'm not a crystal 'user' myself but over the years I've met plenty of people who I felt I could believe when they said they did get something very special from them.
In 1991, after John Armitage of the UK School of Esoteric Crystal Sciences had carried out extensive experiments using the music with many different practices involving crystals, I was awarded an Honorary PhD for the work on this album - Dr.Pete indeed!
For whatever reason - it seems to work

Note: you will see from the titles that some of the mathematical relationships are shared between different structures. The crystal names were a later addition for artistic reasons and the tracks should not be thought of as specific to those minerals"